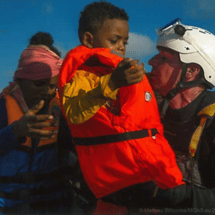 Jim on a rescue mission in the Mediterranean

A veteran firefighter who rescued dozens of people from the Mediterranean Sea is now dedicated to supporting refugees in Scotland.

Jim Snedden, who is based at Dunblane Fire Station, saved dozens of men, women and children from drowning as they fled conflicts in Africa and the Middle East in unsafe boats.

After two rescue missions Jim returned to Scotland but was unable to forget about the suffering he had witnessed. He now joins Scottish Refugee Council as a personal ambassador in a bid to get more people to help refugees settle in Scotland.

Jim said: “After I came back from the Mediterranean I wanted to do more to help people here in Scotland. The people I met on those rescue boats told me they never wanted to leave their homes in the first place. They were forced to leave, forced to risk their lives on unsafe boats under absolutely horrific circumstances. At first I thought that people’s journeys were over once they’d reached dry land, but now I know that’s just the start of another long journey. People need help to find their way in a foreign country and integrate and build a new life. Getting involved in the work of Scottish Refugee Council gives me the chance to lend a hand with that.

“At the Fire and Rescue Service we don’t care about people’s different backgrounds, everyone is entitled to safety and everyone gets the same treatment from us. That’s the way I look at life and that’s why I felt I had to help out when I saw people in need. I’m fortunate to have worked for the Fire Service for twenty years, an organisation that prides itself on protecting Scotland’s communities. Refugees are part of our communities now and it’s up to us to do what we can to help them settle in and achieve all they can here.”

Sabir Zazai, Chief Executive of Scottish Refugee Council said: “Jim is someone who lives the values of compassion and service to others. We are proud and honoured to work alongside him to support people seeking refugee protection in Scotland.”

Alasdair Perry is the Scottish Fire and Rescue Service’s Deputy Assistant Chief Officer for the East of Scotland.

He said: “Firefighters are rare and very special individuals who not only work to prevent danger arising but have the unique ability to respond to a whole range of emergencies.

“But at the heart of each is a humanitarian desire to help your fellow man.

“Jim has taken this mantra a step further, committing his spare time and turning the skills he has gained as a veteran firefighter to helping refugees who are fleeing conflict, but found themselves in life-or-death situations in the Mediterranean.”

Jim is the 2017 winner of the Great Scot award. His decision to join Scottish Refugee Council as a personal ambassador comes as the charity prepares to launch Refugee Festival Scotland, the annual arts and culture festival that celebrates the contribution refugees make to life in Scotland. The festival runs from 15-24 June, with events across the country. www.refugeefestivalscotland.co.uk