The Stories Behind the Faces

On 26th March we had the pleasure of attending The Stories Behind the Faces, an event by Yemeni Scottish Foundation. The event was a platform for seven Yemenis living in Scotland to share their stories, journeys and talents.

Sammy Alakil, Chair of Yemeni Scottish Foundation, hosted the event and guided the speakers through their stories – from childhood in Yemen, to the lives they hoped to lead, to their turning point, to their difficult journeys and their lives in Scotland. Despite treacherous journeys and traumatic memories, it was an evening of hope and inspiration, and a community coming together to celebrate their lives. 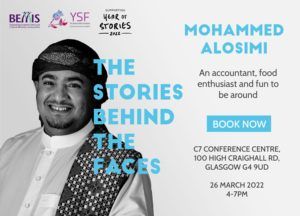 Mohamed Alosimi is an accountant born in Mahwit and raised in Alhudaidah. He moved to Saudi Arabia in 2003. He shared his story of being pushed out of Saudi Arabia by extortionate fees imposed on non-Saudi nationals, being pushed out of Turkey by their refusal to process his family reunion claims, and his traumatic journey across the Danube River in Romania. He has been living in the UK since August 2020. 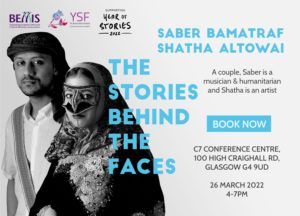 began. Their house was damaged in an airstrike and they were displaced in Yemen. While their house was rebuilt, they were featured in a 2018 documentary called Voice of the Rainbow, for which they received death threats. They were both granted a fellowship at The Institute for Advanced Studies in the Humanities in Edinburgh via the Artist Protection Fund. 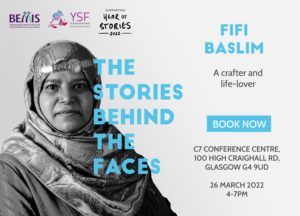 Firdous “Fifi” Baslim is a mother of five children. Her family is from Yemen but she has never been, and was born and raised in Saudi Arabia. Despite this, Saudi Arabia still views her as a foreigner and has imposed new fees on non-Saudis living there. Along with her husband she made the difficult decision to move her entire family to a new country, and they have now been living in Scotland since 2019. They are still awaiting a decision on their asylum claim, but she is studying Fashion and Textile design at Glasgow City College and is growing her craft. 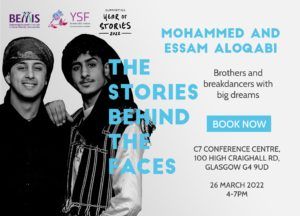 Breakdancers Mohammed and Essam Aloqabi were born and raised in Sanaa, and performed at Arabs Got Talent in 2013 with their crew. When they returned to Yemen after the show, Essam (who was only 13 years old) was beaten up, and they stopped performing when as the country fell into war. A few years later Essam was kidnapped and detained for wearing skinny jeans. The boys made the tough decision to leave, and endured a traumatic journey to Europe. Mohammed now has refugee status in Scotland, while Essam is still awaiting a decision. 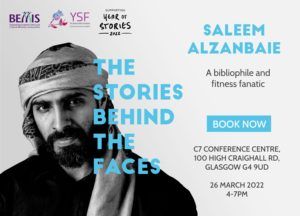 Saleem lived his life in Sanaa but was born in Albayda’. He was forced to flee Yemen not only because of the current war, but because of a family and tribal incident that was threatening to his life. With just $50 in his pocket he fled to Sudan. His journey to Europe was harrowing, but he has now been in the UK since 2019. He is now investing all his time in reading and exercising, he aims to be an influencer and to help others by making a positive impact.

Find out more about the speakers.

Or you can watch the full event:

Part one – Mohammed, Saber and Shatha