STV supports our work to help refugees in poverty 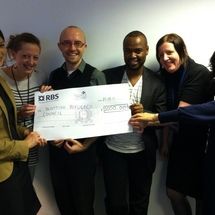 Our team receives the £1,000 cheque from STV’s Poverty Appeal

We were very chuffed last week when we had a lovely surprise visitor from STV – who came to present us with a cheque for £1000.

STV local reporter Katy McCloskey presented the donation, which came from money pledged during the recent STV Appeal 2011 to help the one in four children in Scotland living in poverty.

In September, STV viewers had seen Dominique Mutiba and his family appear as part of the One in Four documentary, where they talked about how poverty had affected them as refugees trying to rebuild their lives in Scotland.

On the programme, Dominique, who fled ongoing conflict in the Democratic Republic of Congo with his family, spoke candidly about the struggles he and many refugees like him face in finding work and being able to contribute fully to life in Scotland. His daughter Jemima also told how growing up with little income affected her life.

An uphill struggle to find jobs and rebuild lives

We were so pleased that STV viewers who had watched this programme saw the need to support the many refugees living in poverty in Scotland. Our own research shows that refugees – even if they do find safety here – still face an uphill struggle to find employment, overcome language barriers, and truly escape the poverty trap.

Our head of fundraising, Chi My Ta, received the cheque along with Dominique. She said: ‘We are delighted and surprised to receive this donation, it is wonderful to have this support from STV to help us go on helping refugees in Scotland.

‘It’s also great that Dominique is here to help receive the cheque; we really appreciate his time in taking part in the One in Four documentary – to help raise this issue on behalf of many more people.’

Check out the story on the STV Poverty Appeal website

Tags: Arts, I have refugee statusleave to remain in the UK, I want to get involved in my community, Policy, Policy and Research, Poverty