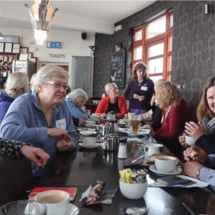 The Sharing Lives, Sharing Languages project was developed in response to the Syrian Vulnerable Persons’ Resettlement Scheme.  It aimed to provide non-native English speakers with opportunities to increase their social connections and practise their English outside the classroom.  A complement to current ESOL provision, the project also provided opportunities for locals and New Scots to share their cultures, languages and lives with each other in a welcoming, informal setting.

A final event took place at Scottish Refugee Council on Thursday 22nd June to celebrate the achievements of all participants.  Peer Education Co-ordinators, Peer Educators and Peers travelled from across Scotland to attend the event and share their experiences with each other.  The project’s external evaluator, Lavinia Hirsu, presented her findings.

Overall, the project was well received and, even after such a short space of time, participants reported that they had increased their social connections, cross-cultural competence and confidence with using other languages.  It is hoped that funding can be secured to extend the project in the coming months.

The project  was managed by Emily Bryson, on secondment from her role as ESOL Lecturer at City of Glasgow College. For more information, the report can be downloaded here: Sharing Lives, Sharing Languages: A pilot peer education project for New Scots’ social and language integration – evaluation report June 2017