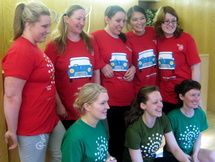 Each team played two 10-minute games, with energy and enthusiasm running high throughout.  In the final was a skilled Destiny Dolls’ team and SQA. The concluding game was a close one, yielding a final score of 12-10 to Destiny Dolls.

Sport supporting a good cause

Hungry and thirsty players and spectators were treated to well-deserved food and snacks.  The event raised around £100, which will be split between Destiny Angels and Refugee Survival Trust.

Among the upbeat activity, there was also time to reflect on more sobering realities.  David Thomson of Destiny Church said that the numbers of asylum seekers and refugees coming to Destiny Angels for food has doubled in the last few weeks and they currently struggle to keep up with demand.

How you can donate