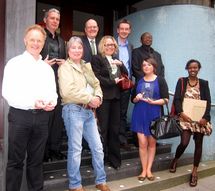 The winners of the 2011 Refugee Week Scotland Media Awards were announced on Friday 24 June at a ceremony at the Tron Theatre.

Comedian Susan Calman led the proceedings to award accurate and fair reporting and photography of refugee and asylum issues in the Scottish press.

This year the awards were hosted by British Red Cross, with UK head of Refugee Services Nick Scott-Flynn introducing the night.

Winners for great reporting of refugee and asylum issues

The quality of the entries was really high this year, making work difficult for the judging panel, made up of Scottish industry professionals and exiled journalists from across the world.

The winners are as follows:

Winner: Angela Catlin, ‘In Sudan the army shot you one time…’, published in the Herald magazine, 25/06/10

Winner: Rebecca Gray, ‘We’re back to school without our Precious pal’, published in Evening Times, 25/08/10

Congratulations to all the winners and nominees!

Read more about the awards in our media section

Check out our facts and figures about refugees and asylum issues