Pinar Aksu: Why detention centres should be shut down 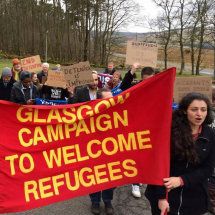 Britain is treating innocent people who are fleeing persecution in their homeland like prisoners. Currently, there are 13 detention centres across Britain. These centres hold many people with many stories. Being the only country in the European Union to have indefinite detention, Britain is not protecting the dignity of human beings and this action is against international law.

Many people seek asylum in Britain with the hope of receiving shelter and to build a better future, fleeing persecution, torture and many acts in their home country which violate their human rights. Then the British Government locks up innocent people without giving further details of how long they are going to be detained.

Unlike the headlines we see portrayed in the media, Britain hosts nearly 30,000  asylum seekers at the moment. Not millions. Asylum seekers are not allowed to work and have to live on £60 a week which can sometimes be issued as Azure cards, limiting where they can shop and what can be bought. These are different ways of humiliating asylum seekers.

When we first moved to Britain, my family was seeking asylum too. We were detained twice, in Dungavel, then in Yarlswood removal centre. My four-year-old sister did not commit any crime. My ten-year-old brother did no harm to anyone. The impact of staying in detention for wanting a safer future, and the struggle we went through as a family, shaped my future path for wanting to work with and for people.

There have been people kept in Dungavel for months and years without further information about what will happen next. This has created many problems for many asylum seekers, mental health being one of the main ones. People are waiting and waiting until they get out of the so-called detention centre, which is equivalent to a prison. Not knowing what will happen takes hope away from people. This is the exact aim of indefinite detention.

At the moment, all over Britain, people in detention centres are on hunger strike. They are hungry for freedom which their home country never provided, but now Britain is doing the same. I ask, where are the human rights here? Where is the country that is supposed to be welcoming and open to diversity?

For this reason, I am calling everyone to end indefinite detention. Shut down immigration removal centres and have a fairer and faster process of providing refuge for anyone who is seeking safety in the Britain. Just a reminder, people flee their country from persecution and to find safety for the future, not out of luxury.

This is a personal blog by Pinar Aksu and does not necessarily reflect the position of Scottish Refugee Council.