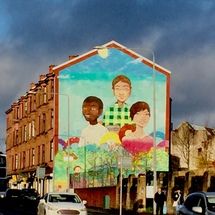 Some people think that getting refugee status will bring an end to people’s anxieties but in reality it marks the start of more challenges. Our Digital Communications Officer Laura accompanies Integration Adviser Rebecca to Maryhill to find out more about our work helping people who’ve been given the right to remain in the UK.

“I tell people to get off when they see the mural of the three children,” explains Rebecca our integration adviser who’s pointing it out from the bus window. (Pictured right)

The colourful mural, created by the artist Elph in 2014 as part of the Glasgow Commonwealth Games, appears even more vibrant against a bruised-looking sky above Maryhill Road. Not only is it an eye-catching feature of the area but it is used by Rebecca to give directions to people visiting her for the first time.

Every Tuesday she’s at Maryhill Integration Network just off Maryhill Road helping people who have recently been granted status by the Home Office. Scottish Refugee Council’s refugee integration advisers help people in their first year after getting a successful outcome from their asylum claim. Some people think that getting refugee status will bring an end to people’s anxieties but in reality it marks the start of more challenges.

Rebecca’s first client of the day is a young Iranian man *Bahram who’s visiting her for the first time. Tea-making and introductions are followed by Rebecca getting a few details from him. From his bag he pulls out a large brown envelope which contains the all-important Home Office letter that lets him know he can stay in the UK. This letter acts as a trigger for other things to happen. Rebecca explains to Bahram what he should expect (an eviction notice for one) and what help she can offer. She then asks Bahram a series of questions and gives him advice on housing rights and entitlements, and accessing welfare benefits. Rebecca explains to Bahram that the word “integration means anything that will help you be part of life here” and that they’ll work together on planning for his future.

After an hour talking with Bahram, she asks if he understands all that she’s said. He wrings his hands, sighs and says: “I understand all that you say, but there’s so much. It’s confusing.” A sentiment many people express.

Rebecca, as one of Scottish Refugee Council’s integration advisers, will now support Bahram for up to a year to navigate his integration journey.  Our integration service matches individuals and families with our advisers who then work with them one-to-one to help them fulfil their goals and aspirations.

Rebecca says “When people get status, they have just 28 days to get everything in order, such as how they’ll support themselves financially, where they’ll live, and what vital documents they need to get on with their lives, such as a biometric residents permit which includes an all-important National Insurance number.  It can be a very bewildering and stressful time for people because of language barriers, having to get used to a different country’s systems, and quite often Home Office and DWP delays mean the 28-day window is just far too short and sometimes forces people into hardship. I’m here to help people in those early days and to empower them for their future.”

WATCH Rebecca as she explains more about her role as an integration adviser for our ’60 Seconds or Less’ series.

People can be referred/self-refer to our Integration Service by phoning our helpline on 0141 223 7979 or by coming to our office to make an appointment.

Scottish Refugee Council’s integration advisers are based at our location in Glasgow City Centre and at the following locations on certain days of the week:

Scotland: Together With Refugees

Thanks so much for joining us for Scotland: Together With Refugees. Hundreds of people gathered…

9 ways you can help

When faced with so many heart-breaking stories on our newsfeeds and tv screens, it’s easy…