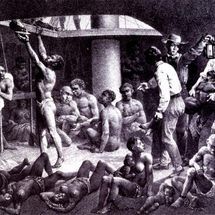 As part of Black History Month, our media volunteer Jack Tannock steps into Glasgow’s past to discover more about the city’s links with the Atlantic Slave Trade.

Glasgow has a heritage of supporting equality, backing radical change and speaking out for the voiceless in society. There’s much to be proud of, but there are some darker aspects to this city’s past, including the shameful part it played in the slave trade.

Local academic Stephen Mullen has been uncovering some of these darker aspects by hosting a series of Sunday walking tours around Glasgow during October for Black History Month. I went along on one to learn more for myself.

Our tour begins at Glasgow Cathedral where some 18th century mercantile families sought to immortalise themselves in stained glass windows and tombs. Sadly these families would have made their fortunes from plantation profits and the slave trade. Glasgow’s Glassford Street (after the Glassford family) and Virginia Street (after the American Colony where many plantations were) are a legacy of this dark chapter.

The tour then led us to the Gallery of Modern Art (GoMA) and St Andrews in the Square Church revealing a past that I never knew about. GoMA was originally the mansion of the Cunningham family while St Andrews in the Square was built by Tobacco lords as their place of worship, but also a display of their wealth and power. Many streets we know well, such as Ingram and Buchanan, bear the name of slavers. Reminders of Scotland’s part in slavery are hidden in plain sight.

A Chance to remember

As well as a legacy here in Glasgow there are reminders of Scotland’s part in slavery in many former colonies. Most Scottish slavers were based in Jamaica; about a third of the country’s white population were Scottish, and to this day there are several Scottish place names in Jamaica: Glasgow, Dundee, Aberdeen, and two Culloden’s!

In spite of such strong connections, Scotland and Glasgow need to do more to recognise their role in this period. Glasgow is the only Atlantic city in the UK without a memorial to slavery or a permanent museum exhibition about the topic. Cities such as Bristol and Liverpool have gone much further than us in recognising their part in slavery.

Not all Scots supported slavery though. Great enlightenment thinkers such Francis Hutchison and Adam Smith challenged slavery and many others fought for abolition. The tour took us to the original sight of The Old College in Glasgow, which was singled out for praise by the leaders of the abolitionist movement for its campaigning role.

In 1778 the courts took the monumental step of banning slavery in Scotland prompted by Joseph Knight – a household servant in Scotland who ran away and when caught attempted to prove his freedom. The court ruling was unexpected but hugely symbolic.

Ultimately Scotland has much to be proud of from this period as well as much that is shameful, but we must do more to remember the part we played in the slave trade.

This World Refugee Day, join us in a show of friendship and solidarity with people…