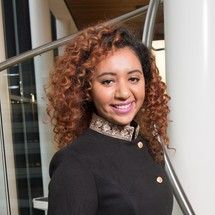 Ahead of the 2019 Glasgow Girls tour, Scottish Refugee Council ambassador, Amal Azzudin reflects on the story behind the sell-out musical.

“In the year 2005, a school friend was dawn raided and detained after living in Glasgow for 5 years. At the age of 15 Agnesa and her family, Roma Gypsies from Kosovo, heard a knock on the door on an early Sunday morning, when her father opened it he saw 14 home office officials wearing bulletproof vests and helmets. The Home Office officials took the family of 5 and separated them into two vans and drove them to a detention centre in England called Yarlswood and locked them up like criminals for 3 weeks.

No one chooses to be an asylum seeker no one chooses to be a refugee. I came to the UK as a refugee so I know too well what it feels like to leave everything behind and to start a new life. Luckily our family was brought to Glasgow and in 2004 we received refugee status. This meant that we were not in fear of being deported. However, when Agnese and her family were taken I had to do something. I did not know much about politics or campaigning but I had to speak up.

On the Monday morning I went to see our bilingual teacher and total legend Mr. Girvan and he had explained that Agnesa might get deported. He could see that I was angry and shocked.

The next thing I knew I was on the BBC news and newspapers. Five other girls from the school joined me and we became known by the media as the Glasgow Girls. There’s Emma, Jennifer, Ewelina, Roza, and Toni-Lee. Emma came up with the idea to start a petition in the school asking for Agnesa to be released from detention and almost everyone in the school signed it. We submitted the petition to our local politician. While we were campaigning Agnesa’s lawyer managed to gather evidence to show the Home Office that if the family was deported they would be persecuted as Roma Gypsies were a minority in Kosovo. Three weeks later Agnesa and her family were released from detention and they were granted refugee status in 2007.

Our story has since been turned into two BBC documentaries, a stage musical, and a BBC 3 drama. In 2010 the UK government announced that there would be an end to child detention which was a huge achievement for everyone who has campaigned for this inhumane treatment to stop.

The Scottish Refugee Council have been involved in our story since the beginning. Their support is invaluable and it was through them that we were approached by the fabulous Scottish actor, director and musician Cora Bisset regarding turning our story into a stage musical.

Initially, I was not sure how a story about child detention would be portrayed as a stage musical but it has become one of the best ways to share our story in a creative, entertaining and moving way. I love the musical not because it is about our story but because I feel like it has captured the story in such a beautiful way. It clearly shows our love for Glasgow as our special place we call home. It also shares the community spirit and how people from all walks of life came together to stand against injustice and stand up for human rights, equality, fairness, and humanity. We are very proud of the musical and we are excited that it is coming back to Scotland in January 2019.

We did not always win every case we campaigned for, in fact, we know so many families who were deported. This is why the work of the Scottish Refugee Council is so vital. I am honoured to be an ambassador for the charity. They work tirelessly to help and support some of the most vulnerable people in our communities. Projects like the Refugee Festival Scotland, Cup of Tea with a Refugee and Tastes from Home, help bring communities together and challenge xenophobia, racism, and discrimination.

As human beings, I believe we have a duty and a responsibility to do what we can to stand up for what is right. We all have skills and resources that we can utilise to help others no matter what gender, race, sexual orientation or faith they are.”

This World Refugee Day, join us in a show of friendship and solidarity with people…