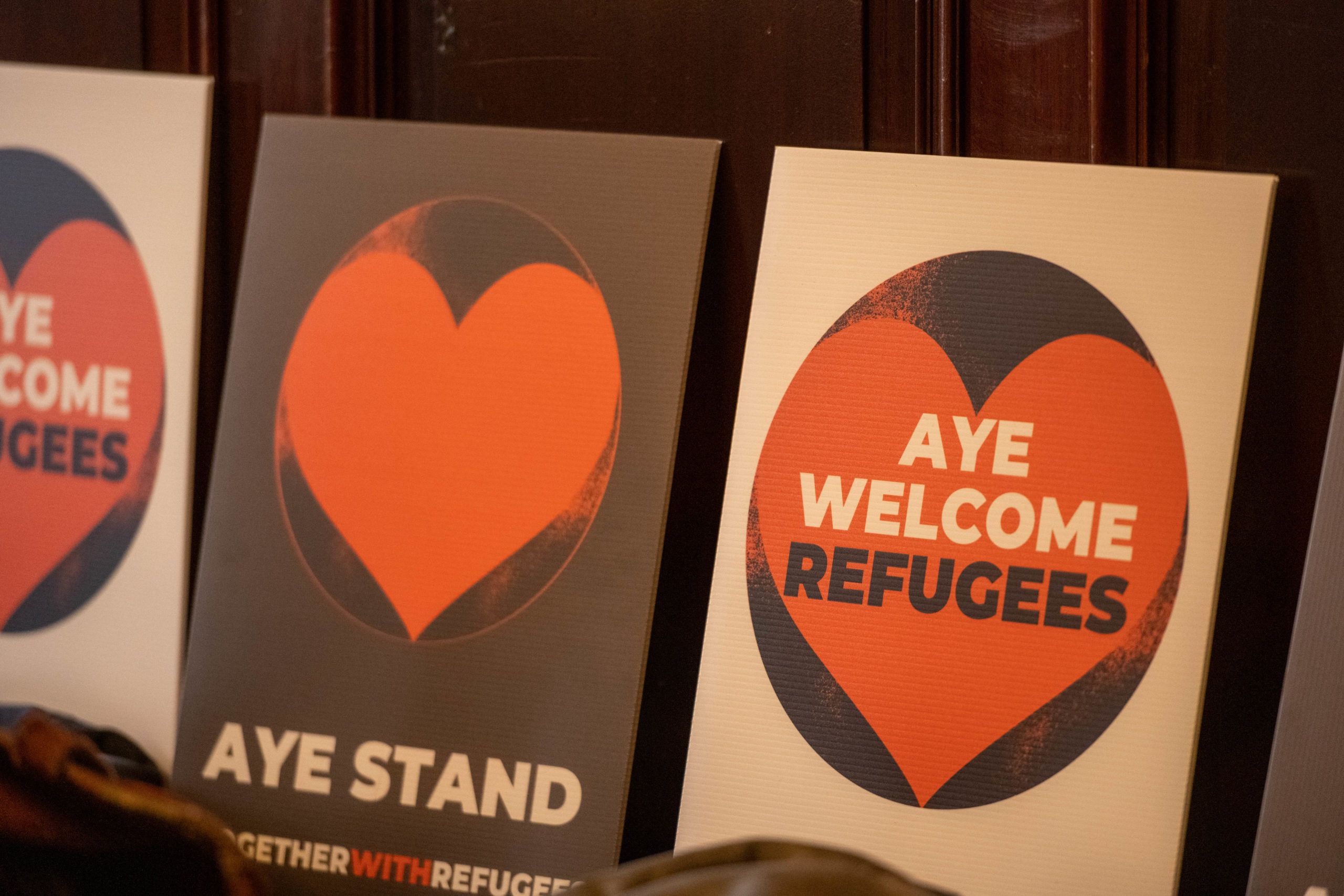 Comedian Frankie Boyle is among over 40 celebrity signatories to an open letter to Boris Johnson, calling for a kinder, fairer and more effective system for refugee protection.

The letter marks the end of a UK-wide week of action organised by Together With Refugees. At an event in Glasgow on Wednesday, Scottish Refugee Council gathered with colleagues, partners and members of the public to stand up for refugee rights and oppose the UK Government’s cruel Nationality & Borders Bill.

Frankie Boyle said: “There is nothing funny about the situation facing people in Afghanistan today. Many now face threats to their life under a barbaric regime. We cannot ignore their plight just because they happen to arrive here on a small boat or in the back of a lorry, as the government proposes.  This anti-refugee bill is a disgrace and must be rejected.”

The new legislation would mean that most people who would be accepted as refugees under the current rules – meaning those confirmed to have fled war or persecution following rigorous official checks – would no longer have their rights recognised in the UK due to their method of arrival. Half of these would be women and children and includes those left behind in Afghanistan.

Other celebrity signatories include Olivia Colman CBE, Stephen Fry, Shaparak Khorsandi, Joanna Lumley OBE FRGS, Thandiwe Newton OBE and Robert Rinder.  You can read the full letter on the Together With Refugees website.

Robert Rinder said: “In 1945 my grandfather arrived in the UK as a child refugee from the hell of the holocaust.  We can help provide sanctuary to those in danger now who have overcome terrible struggles to find their way to safety and freedom. This is what our country is at its very best.  We must not turn our backs. We must oppose this bill currently going through Parliament.”

Other signatories, including Simon Callow CBE, Stephen Fry, Mae Martin, Anna Richardson, Fiona Shaw CBE and Gok Wan MBE, could now be in fear of persecution if they lived in countries such as Afghanistan, Uganda or Nigeria because they are members of the LGBTQ+ community.

Female journalists, comedians and actors including Fiona Glover, Kerri Godliman, Emma Kennedy, Joanna Lumley, Francesca Martinez, Dame Jenni Murray DBE, Rachel Parris, Fiona Shaw CBE, Imelda Staunton CBE, Juliet Stevenson CBE and Zoë Wanamaker CBE have signed the letter, aware that if they were living in another country they could be in fear of persecution because of their jobs.

Signatories with a history of support for refugees include comedian Romesh Ranganathan, actors Riz Ahmed, Douglas Booth and Samuel West, and the band Kaiser Chiefs.

The week of action included events across the country including rallies in Lancaster, London and Penrith; a sunset vigil at the pier in Hastings; craftivism at the People’s History Museum in Manchester; school children writing messages of welcome on orange hearts to display in Halifax; and a public discussion with politicians and people with direct experience of being a refugee to consider the implications of the Bill in Wales.

What could the Anti-Refugee Bill mean for devolution?

Our response to the tragic loss of life in the Channel

We are devastated by the latest deaths in the Channel. Our thoughts are with the…