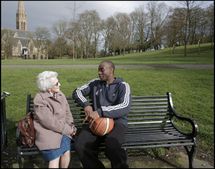 Rosa and Christian feature in Courage, our Refugee Week film

Edinburgh International Film Festival has joined some of Scotland’s top venues in getting behind Refugee Week, which begins next week on June 20.

The Film Festival opens June 15 and as part of its programme will be screening two special films on June 20 to mark World Refugee Day and the beginning of Refugee Week.

The films will be preceded by a screening of Courage: 60 Years of the UN Refugee Convention, a powerful and moving short film, created especially for Refugee Week 2011 by six refugees living in Scotland.

Watch the trailer for Courage: 60 Years of the UN Refugee Convention at www.youtube.com/refugeeweekscotland

The six filmmakers, from as far afield as Pakistan, Afghanistan, Nigeria and the Democratic Republic of Congo, researched, directed, filmed and produced this moving two-minute documentary. Courage: 60 Years of the UN Refugee Convention was made with the assistance of Media Co-op and Scottish Refugee Council, with support from the Big Lottery Fund.

The Festival will be joining nearly 50 venues across Scotland in screening the two-minute film Courage, including Glasgow Film Theatre, Citizens Theatre, An Lanntair, Perth Playhouse, plus many more schools, libraries and workplaces.

An exhibition of behind-the-scenes photos to accompany the film will also be on display at The Arches, Glasgow, until June 28.

Tags: I want to get involved in my community, Refugee week