These brave young people arrived in Scotland as frightened children seeking safety. Now, with the support of the Scottish Guardianship Service, they’re preparing to become the tv producers, engineers, business owners, mechanics and fashion designers of the future. 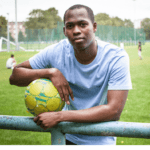 Meyman fled Somalia to escape al-Shabaab when he was just 15-years-old. Two years later he arrived in Scotland, alone and unable to speak the language.

In Somalia, Meyman didn’t get the chance to go to school. Today, he’s studying English at college:

“I want to be an engineer, for construction, for buildings, roads. And since I’ve never attended school I know that I need to do a lot of work, so I will really, really work hard.”

Although he is still haunted by the things he saw in Iraq, 16-year-old Dlovan is learning to laugh again.

The Kurdish teenager is settling into his new life in Scotland has big plans for the future.

“I am hoping to become a very big businessman to help the Scottish people or anybody staying on the streets with nowhere to live.” 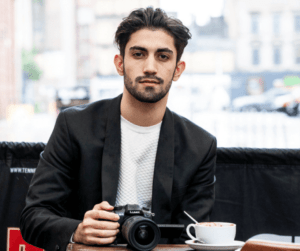 19-year-old Zayn loves living in Glasgow. When he arrived in Scotland four years ago, he lived in constant fear of being sent back to Iran.

With the support of his guardians, Zayn made it through the years of uncertainty and has now been granted Refugee Status.

Today, he’s a student at City of Glasgow College and hopes to get a job in the media when he completes his HND in TV production.

“A journalist, cameraman, sound or lighting – that would be really good. One day I’d like to work for the BBC.” 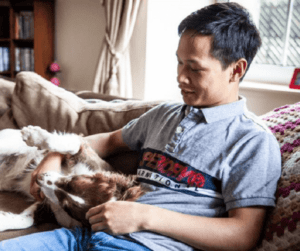 When Hai arrived as a terrified 15-year-old from Vietnam, he didn’t speak English and didn’t know who to trust.

But thanks to the support of his foster family and his guardian, Hai has a bright future ahead of him.

“My dream job? I want to do an apprenticeship to be a carpenter or a mechanic. I’m going to try to save up so I can get a mortgage and buy a house.” 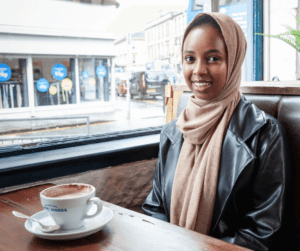 Fartun was one of the first young people to be supported by our Guardianship Service, when she arrived in Scotland from war-torn Somalia back in 2010.

Now she’s a Fashion Technology student with plans to design outfits for her fellow Glaswegians.

“Hopefully one day I’ll open my own clothes shop. There aren’t many Muslim shops in Glasgow so I’d like to sell Islamic gowns.”

The Scottish Guardianship Service supports children and young people who have become separated from their families and arrive in the UK frightened and alone.

The service is run by Aberlour Childcare Trust in partnership with Scottish Refugee Council. We provide advice, guidance and one-to-one support to help young people recover from their experiences, return to education, make friends and begin rebuilding their lives.

Read more about our support for  children and young people.

All images by Robin Mitchell Photography.

“The beautiful game” bringing communities together

Scottish Refugee Council CEO, Sabir Zazai, shares his thoughts on the 70th anniversary of the…

As the 70th anniversary of the UN Refugee Convention approaches, Katherine Mackinnon from the University…