On 28 July 1951, the UK Government signed the UN Refugee Convention, promising to defend the rights of people fleeing from war and persecution. 70 years on, the principles and protections enshrined in the treaty are under threat. We asked Paria Goodarzi and Francisco Llinas – two artists who came to Scotland in search of safety – what this 70th anniversary means to them…

We live in an ambivalent world. Since 2014, there have been more than 10,000 refugee deaths in the Mediterranean. Against the backdrop of a UK Government failing to meet it’s obligations under the UN Refugee Convention, we questioned whether this anniversary is a time to celebrate, or to protest. 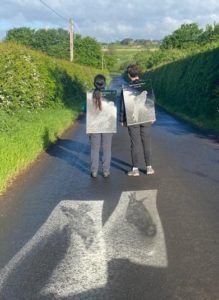 In response, we decided to walk 23 miles from Dungavel Immigration Removal Centre in Strathaven to the Home Office building in Govan. As part of our performance, we wore engraved mirrors on our backs, to reflect ideas of social and national identity, freedom of movement, and underrepresentation.

The name of our piece, Amber, responds to the sense of uncertainty that many of us are living in, due to Home Office hostile environment policies. Asylum seekers find themselves trapped in a state of in-betweenness. Through our actions, we want people to wake up and acknowledge the dehumanisation of migrants at the hands of political structures.

We have both walked this path before. Amber is a literal and metaphorical reflection of our own personal journeys, our stories of displacement and our struggles to navigate the bureaucracy and political structures that stand in our way. It is also an act of documentation, a recording of our present political and social flaws for what we hope will be a better the future.

Our journey began at 6am, with a sense of tension. We were preparing ourselves in the carpark outside Dungavel House, when a security guard arrived and told us we had to leave.

As we walked away from Dungavel, we thought about the people who are put in this place. People who came to Scotland thinking they had arrived in the promised land, but instead are held here. Their only crime was to seek asylum.

The walk was an emotional experience and a chance for reflection. The literal reflection of the landscape in the mirrors, and a thoughtful reflection on the experience of movement and migration. 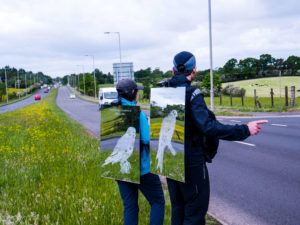 Many metaphors became apparent as we walked. It was colder than we had thought, which reminded us of how unprepared we were when we first began our journeys to Scotland. We wanted to travel as light as possible because we knew the road ahead of us would be long.

Without doubt, the moment of greatest anxiety came as we got closer to the city – and closer to the point when our paths would separate. The heavy traffic and the thought of being alone for the next section of the journey was really hard.

At around 2pm, we parted ways and each took a different route. For almost two hours, we walked with only our own thoughts for company.

Meeting up again at Queen’s Park in Glasgow and seeing people gathered there to welcome and support us was very emotional. By this point, we had been walking for more than nine hours. We were feeling exhaustion mixed with joy, gratitude and a sense of achievement. 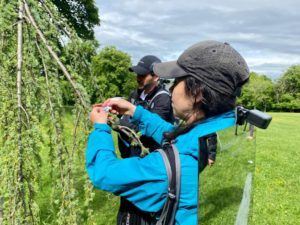 Before continuing on to the Home Office building on Brand Street, we tied white ribbons to a tree planted by Scottish Refugee Council near the flagpole in Queen’s Park.

The act of tying ribbons was repeated at many stages of our walk, as a celebration of our stories and as a symbol of our protest.

We pushed our bodies during the last hour of our journey. With the support of friends and family, we made it to the Home Office building. On the way, we shared our thoughts with people walking alongside us.

We marked our arrival with a collective action of tying white ribbons to the Home Office fence. 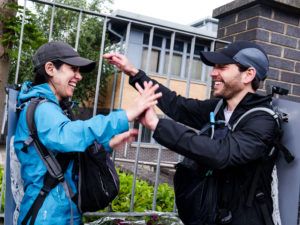 It was a moment of deep reflection for us. In one day, we had travelled from the Immigration Removal Centre, where refugee rights are denied, to the Home Office, where there is the  potential of obtaining refuge and safety.

To our eyes, these two buildings not only represented the beginning and end of our Amber journey, but also the two outcomes of the British migration system.

It’s devastating to see places like Dungavel, where space and resources are invested in the dehumanisation of people who are only seeking safety.

70 years after it was signed, the rights enshrined in the UN Refugee Convention are still not secure and are subject to debate. That says a lot about what we have achieved and what is still needs to be done.

If we can bring these issues into people’s minds for at least a couple of minutes and prompt them to ask themselves, “what is our role in all of this?”, that would mean our protest was a success.

See AMBER: As it Happened, for more photos and reflections from Paria and Francisco’s remarkable journey.

WATCH Paria and Francisco’s journey below.