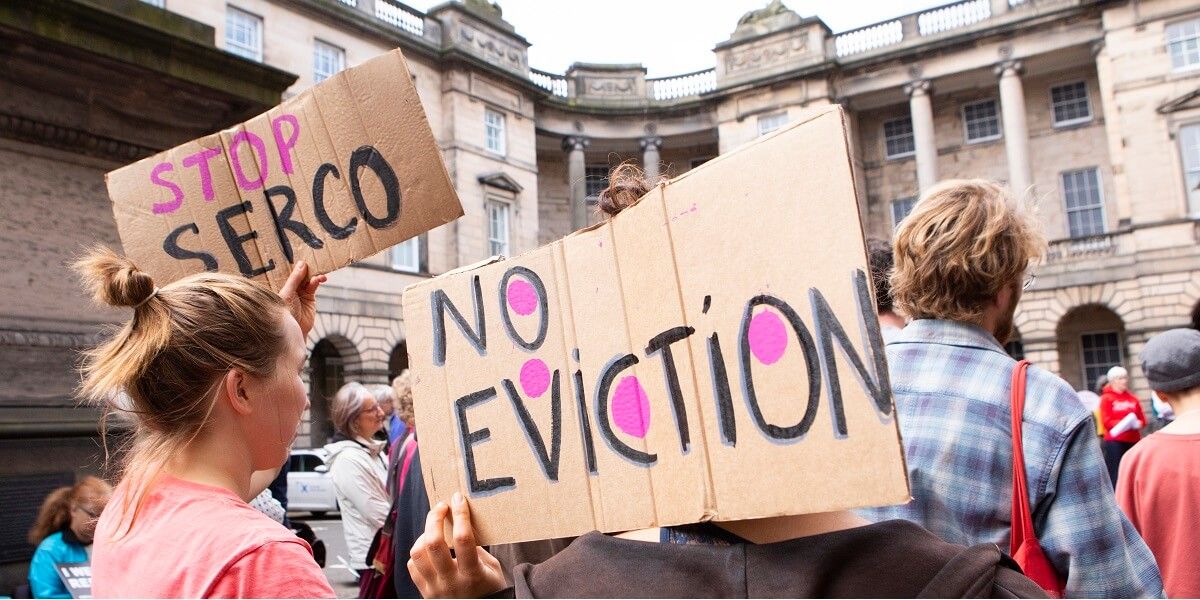 Around 130 court actions concerning proposed lock-changes by Serco have been put on hold or continued by Glasgow Sheriff Court meaning clients in all those cases have been protected.

Another handful of cases were dismissed, as asylum support had been reinstated for those clients.

Lawyers representing people affected by the policy are seeking interim interdicts from the Sheriff Court on a case-by-case basis as a means of protecting people at risk of summary eviction, while the law is being clarified.

Govan Law Centre (GLC) has meanwhile appealed a Court of Session decision that the lock changes were not unlawful.

Fiona McPhail, principal solicitor of Shelter Scotland, said: “The collaboration of lawyers and charities working in this area has been calling on Serco to pause their lock-change programme since it was recommenced in June 2019.

“Serco’s insistence on pressing ahead with the lock-changes, despite the lawfulness of this procedure being subject to ongoing litigation, has resulted in lawyers from Shelter Scotland, Legal Services Agency, Latta & co. and Govan Law Centre having no option but to take urgent steps to raise these interdict proceedings on behalf this very vulnerable client group.

“This client group is particularly vulnerable, not just because they claim to be fleeing persecution from their country of origin, but because unlike most of us, they are unlikely to have access to homeless services or other forms of social welfare. They are in effect being forced into destitution on the streets.”

“Every day, we see and hear the torment, confusion and fear of people that this cruel lock change programme is causing. Our colleagues are coming to work, facing a packed reception area with people in desperate need.

“And, these are men and women who sought safety here. They have fled countries such as Iran, Afghanistan and Eritrea. Some, tragically and disgracefully, are now lock change victims. One woman has serious mental health issues, but now she is street homeless. One man had an urgent health appointment for heart problems, but he is street homeless too. That is the reality, that is why today’s Sheriff Court actions matter, and that is why we hope the Court of Session appeal against summary evictions by lock changes is successful.

“Were it not for the Sheriff Court’s actions today and Scotland’s housing lawyers, over 100 men and women would be facing lock changes and street homelessness within days or weeks. They would be cast out onto Glasgow’s streets with nothing and nowhere to go. This is being done by a multinational with billions in revenue whilst the Home office, quite disgracefully, by-stand.

“Street homelessness should have no place in Glasgow, Scotland or the UK, and that includes in the asylum system.”